This band came to me randomly, through a random email inquiry promoting an event. I decided to check it out, watch some videos, see what they are all about. The first thing I noticed was video quality, followed by some of the most talented musicians for each instrument played. Then sweet angel sounding Tiaday Rock. I was like, this is cool. Then, somewhere from the depths of a deep dark cave, came a gut wrenching scream that caught me off guard. I’ll be honest, it is a style that usually makes me cringe. I will be even more honest, Tiaday’s style in this genre of vocals made me jump out of my rolling office chair in celebration! This band, this singer, and the professionalism that is obviously around them is a recipe for something special. Keep an eye on these rockers. 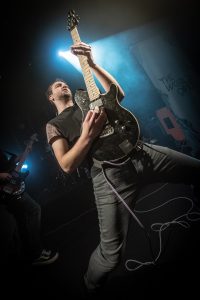 FUELED BY THEIR DESIRE TO BREAK DOWN THE RESTRICTIVE GENRE BARRIERS OF TODAY’S MUSIC INDUSTRY, THE WORLD OVER’S MULTIFACETED APPROACH, UNIQUE SENSE OF CREATIVITY AND OUTSIDE THE BOX THINKING PROMOTES DIVERSITY IN THEIR MUSIC WITH THEIR SOUND AND WHO THEY ARE (LGBTQ+ FRONTED AND ETHNIC DIVERSITY), ALLOWING THEM TO COMBINE ROCK, POP AND METAL WITH KILLER TEMPO TRANSITIONS, SOULFUL CHORUSES AND SPINE CHILLING SCREAMS. ESTABLISHED IN 2014 AT THE L.A. MUSIC ACADEMY BY FRONT-WOMAN TIADAY ROCKE AND LEAD GUITARIST RYAN KNECHT, BASSIST JUAN ARGÜELLO AND DRUMMER ALEJANDRO MERCADO WERE SOON INDUCTED THEREAFTER. THE LINEUP WAS ROUNDED OUT WITH THE ADDITION OF RHYTHM GUITARIST CHRISTIAN RIVERA IN 2020.

THE WORLD OVER ESTABLISHED THEIR MUSICAL IDENTITY WITH THE RELEASE OF THEIR TWO SUCCESSFUL EPS; RAMPART DISTRICT (2014), AND MOUNTAINS (2017). THEIR LATEST SINGLE REWIND/REPLAY WAS RELEASED IN DECEMBER 2018 TO CRITICAL ACCLAIM, AND IN ONLY 8 MONTHS THE SINGLE REACHED OVER 500,000 VIEWS ON YOUTUBE ALONE. THEY ARE CURRENTLY WORKING ON THEIR FIRST FULL LENGTH RELEASE, WHICH WILL REPRESENT THEIR UNIQUE MUSICAL OUTLOOK ON THE WORLD. T.W.O. HAS GRACED THE PAGES OF MULTIPLE MEDIA PUBLICATIONS INCLUDING THE LIKES OF ALTERNATIVE PRESS, WHERE THEY HAVE CAPTIVATED THE HEARTS AND MINDS OF MUSIC FANS AROUND THE GLOBE.

TIADAY ROCKE HAS EVEN BEEN LABELED AS ONE OF THE TOP 100 WOMEN IN MUSIC BY ALTERNATIVE PRESS. WARPED TOUR FOUNDER AND CREATOR KEVIN LYMAN INVITED THE BAND TO TAKE PART IN THE FINAL EVER (TOURING) WARPED TOUR (2018), AND CONSEQUENTLY THE WARPED TOUR ANNIVERSARY SHOW (2019).

AMONGST THEIR SUCCESS ON WARPED TOUR, THEY HAVE COMPILED COUNTLESS MILES AROUND THE GLOBE HEADLINING SHOWS AND AS SUPPORT FOR SUCH BANDS AS OTEP, ESCAPE THE FATE, SLAVES (U.S.), TO NAME A FEW. AND THEY’RE ONLY GETTING STARTED… 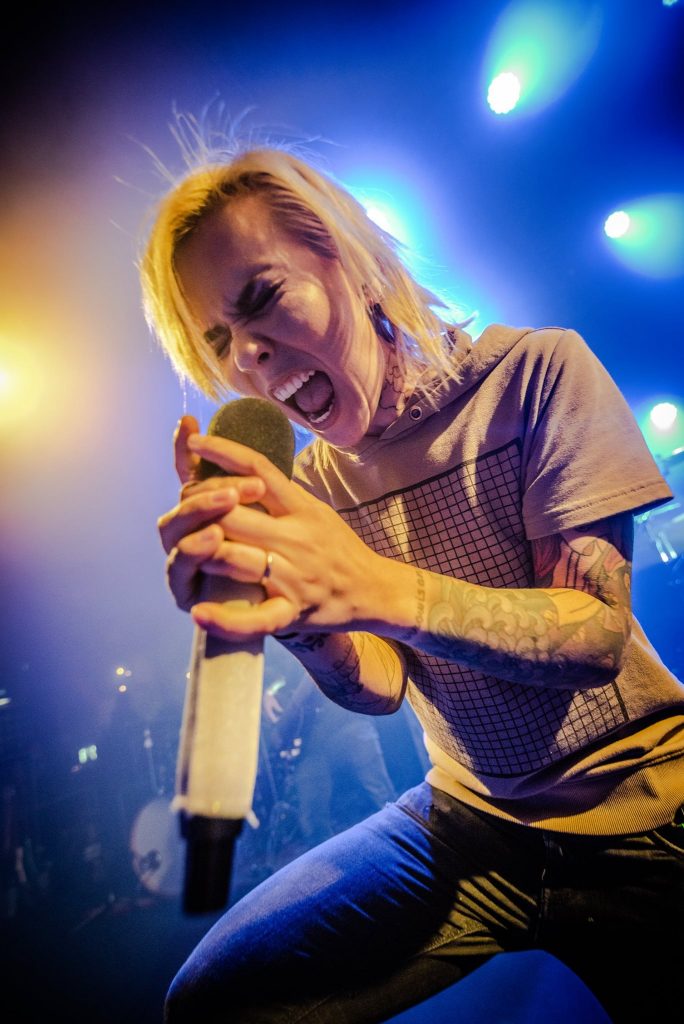 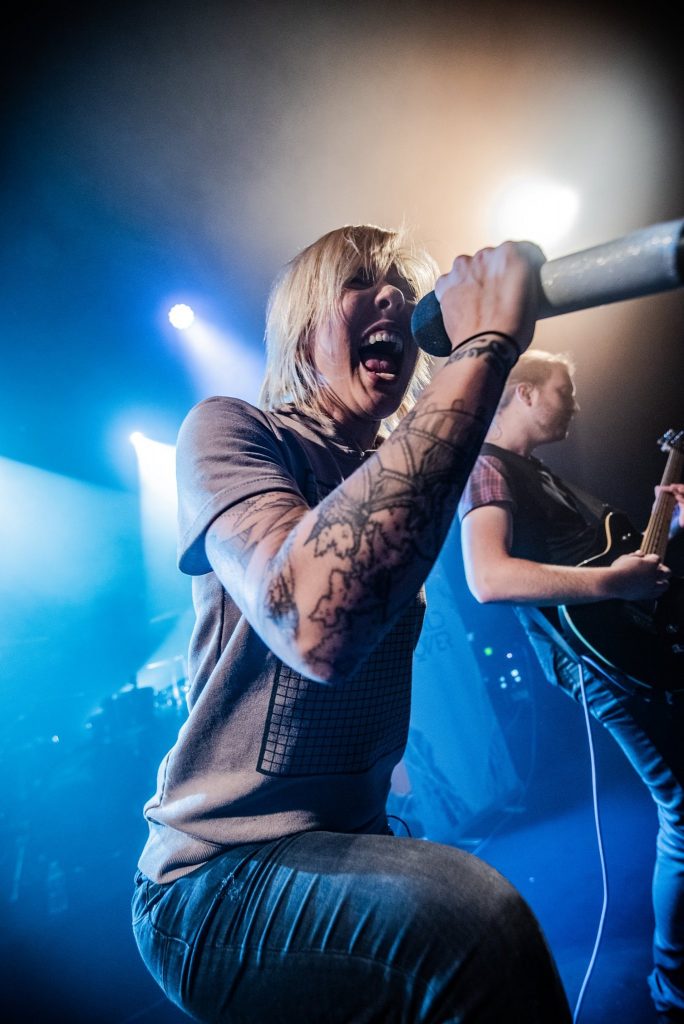 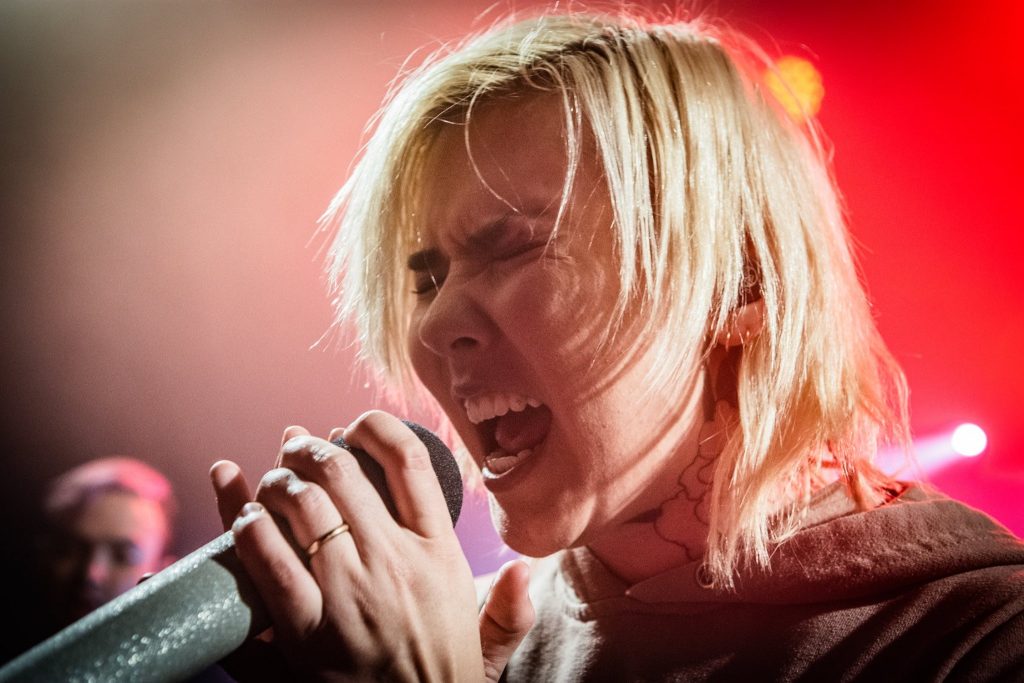 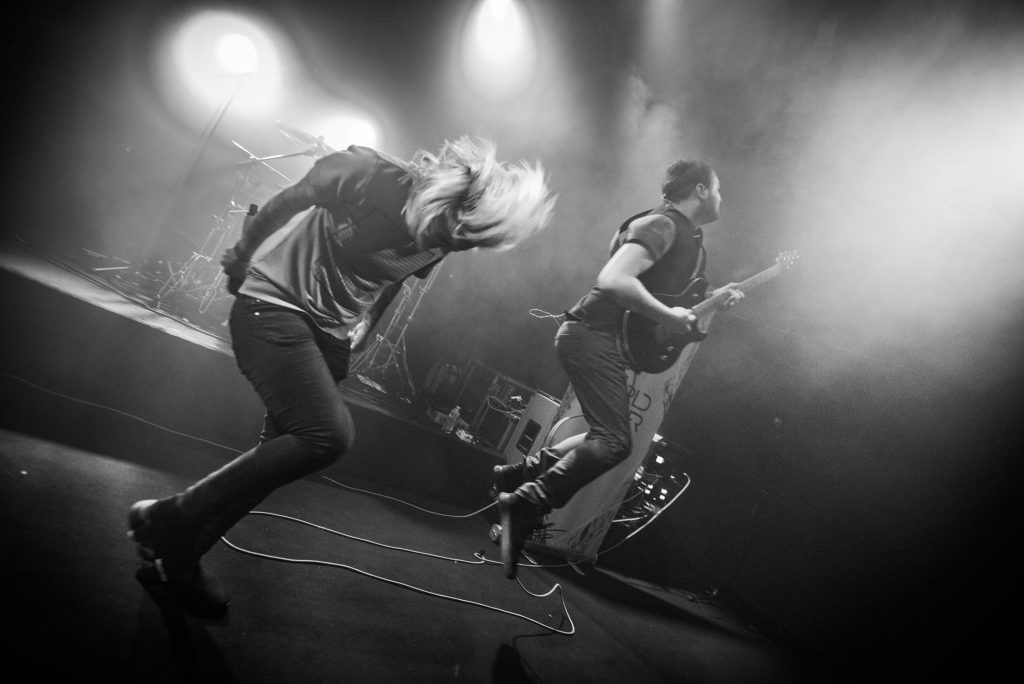 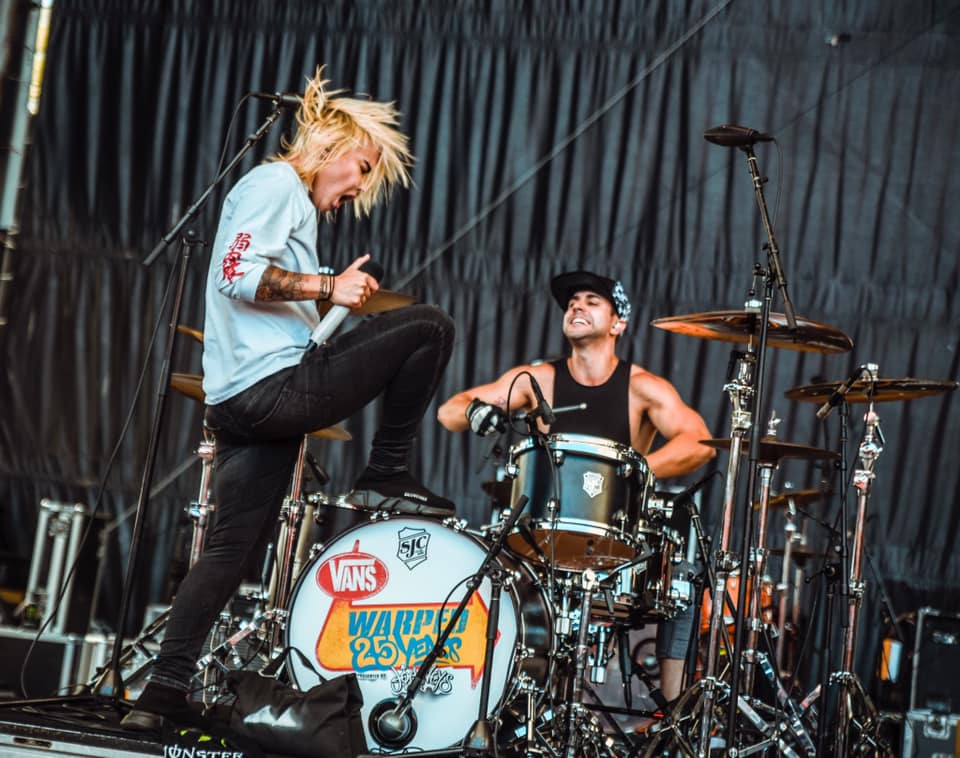 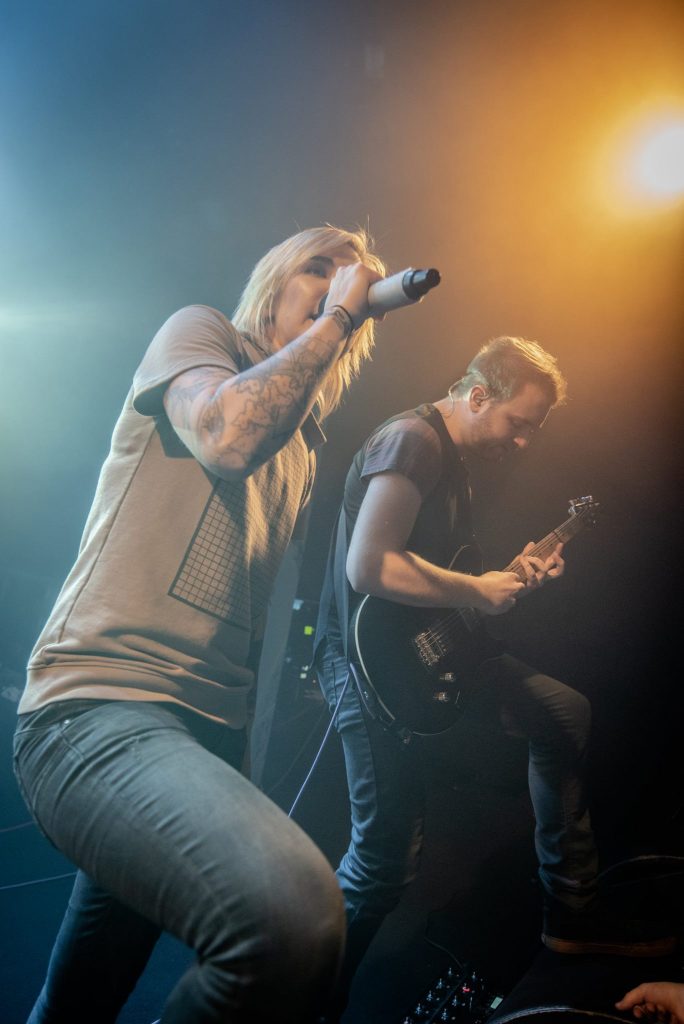 What makes you Officially Rock? Our passion and attitude while playing our music! We’ve got the drive and the moves baby!

What drives you as a musician/band? I think our guitarist Ryan puts it best: You’ve got to really want IT IT can be a number of things to different people. For me at a young age IT was a music career. Watching musicians play to massive crowds with remarkable talent and hearing songs I wish I could call my own was nothing short of inspiring. They had IT and I wanted IT too. What I’ve learned since then is if you want something, you’ve got to really want IT. You have to be prepared to fail repeatedly for years with no guarantee of moving up. You have to let those who doubt you fuel your motivation. You have to learn to appreciate the victories no matter how small and insignificant they may seem. You have to expect that after all the effort, just when you think you have IT, someone will come along to show that you don’t. IT is easy to want in the beginning, but in the end if you still want IT, then one day you just might have IT. Until then, find where the craving comes from and exploit that. In my path I found IT stems from my own creative output. Creating is my drug, music is my vessel, and IT will come a desire to outdo nobody but myself everyday.

What/who are your main influences? They tend to vary almost each album/ep cycle but the most consistent have been: Deftones, Issues, Mars Volta, TesseracT and Bring Me The Horizon.

What is your songwriting process? Usually Ryan sends a demo that everyone can adjust their parts on and I write over that for the most part til we go back and forth. Or I go to him to record temporary vocals then we take it to a producer to give some finishing touches or take out anything that doesn’t work. On occasion, Ryan will build off of a melody I send him from scratch but it’s usually something that needs to be done in person. Sometimes we just take Ryan’s demo unfinished to a producer and build it with them there so it really varies every time.

What is your craziest road story? On our first tour to the UK/EU, we rented an RV and got insurance on it. It was surprisingly very cheap and a bit suspicious but we went along with it. The running joke whenever anything bad happened was “oh well, we have insurance”. The first small disaster started with Ryan opening his assigned clothing drawer and the door just falls off. “Oh well, we have insurance”. The next, Alex opens the fridge door and the handle breaks off. “Oh well, we have insurance”. Then he opens the sliding door divider from the front of the rv to the bed and it comes off completely from the hinges. You know where this is going. One day, I’m sleeping and wake up to the sound of thudding on the side of the RV. I asked Juan and he said he drove through a tunnel that was too small and the noise is the satellite dish hanging by it’s cables off the side. We duct taped it together and somehow still was gone one day. Oh well, at least we had insurance, right? Nope. Insurance barely covered any of the damages. Was this thing built at an IKEA??? Why was it so fragile?!

What is your scariest road story? I think the scariest time we had on tour was the last time we went out with Otep in the winter of 2018. We hired a friend of Alex’s to drive the bus cuz every winter tour we do, we end up sick because we get no sleep and are freezing in the front seat (there’s a weird draft by the driver feet area). So one morning around 6am(?) driving through Maryland we’re all asleep but Ben (driver) needs to pee. He sees a sign that says something about the NSA and thinks “well here’s finally some civilization, there’s probably a gas station off this exit”. Nope. It’s a one way in, one way out direct entrance into the NSA headquarters. We all wake up to two cops yelling at us to get the fuck up and off the bus. They line us all up and we’re waiting for hours for the supervisor to show up to figure out what to do with us. There’s no restroom for Ben and they wont allow him to pee in the bushes on the property so they bring him a jug and he has to pee in front of them. At this point, everyone needs to pee (but me and Juan) so they all have to take turns peeing in the same jug. They search the bus and there was no weed but Alex’s grinder had some keef at the bottom and they bagged it up and gave him a court order hearing. He got insanely lucky and got a lawyer friend to get him out of it but it could have ended really badly and have been on his record.

What are your thoughts about the current music business in general? I think with how covid turned everything around that there’s a lot to look forward to and more appreciation for the music industry, especially the local scenes out here in LA. There used to never be any support for local bands here cuz bands are a dime a dozen in Hollywood but now everyone is showing up. It’s really awesome.

Where do you see your music career in 10 years? Headlining stadiums playing with our idols

In one word, why are you in a music career? Passion.

The World Over – Feral Bourbon House