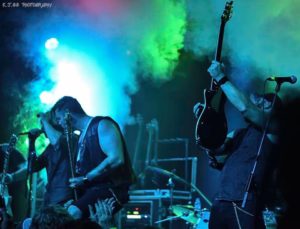 Lot’s of theory about this band, none of which will be silent. One thing I really love about this band are the lyrics, and the ability to actually understand what is being sung. Sounds weird right, but think about it next time you are listening to some rock. Some of the newer stuff these days, I am like, what the fuck are they even saying? Now that I have that out of the way, the use of various instruments intrigues me as well. Sometimes it’s just sound effects, guitars, drums, vocals…blah blah. Silent Theory, I immediately noticed, uses violins (fiddles where I come from), piano, and many more instruments…. if you dig your ear in and actually listen. Yes, it may be electronic, but none the less sounds good to me. Silent Theory is definitely worth a listen, when you hear one song, your soul will beg for another. Next thing you know, you are a fan like me! Photo Credit: Silent Theory Facebook Page

Bio: In a society where new bands pop up every day, Silent Theory is here to set a new standard. The band found success with their single, “Fragile Minds,” released June 2016, charting at #97 for Media Base Active-Rock and #29 for Under the Radar charts. It has since surpassed 2 million video views on YouTube and continues to grow rapidly. Following this success in June 2018, the band released their second single off of the album, Delusions, “Watch Me Burn.” The single charted at #67 on the Media Base Active-Rock charts.

What makes you Officially Rock? Heavy riffs, catchy melodies, impactful lyrics, and an energetic live show. Oh, and we are funny dudes. We think.

What drives you as a band? Because 8-5 jobs suck. We are also privileged to share our art with people in an impactful way. We have had a huge outpouring from fans regarding how our music has resonated with them, and we don’t believe there is anything more rewarding.

What/Who are your main influences? While the band has music that we all collectively love and pull inspiration from, individually, music tastes vary. Robert grew up with a punk influence, George draws from a blues and jazz influence, and Dakota brings more of a hip-hop background. What this has enabled us to do is allow for a diverse writing portfolio.

What is your songwriting process like? Typically one of the band members comes to the group with a riff, and it’s developed musically through repetitive run-throughs. Once the music is established, Dakota usually writes the lyrics. We used to try and write together, but found that this process seems to be the most efficient. Getting five guys to completely agree while writing a song sometimes proves impossible.

What is your craziest road story? This last summer while on tour, our bus broke down in Denver, Colorado, right before the last date of the tour. We had had quite a few problems with it during the tour, and basically patched together what we could to keep moving. Once in Denver though, the bus was shot. We were stranded on the side of the freeway, and had to get to Grand Junction for our show with Saliva. While that story within itself doesn’t sound crazy, what makes it crazy was us pulling an all-nighter frantically renting UHauls and cars, and trying to find a tow big enough to haul our 40′ bus. We had a trailer full of gear and found that nothing we rented could pull it. So here we are trying to handle logistics of this bus, finding a way to transport gear so that we don’t have to abandon it in Denver, and still make the show four hours away. After three different UHaul location visits all before 8:30 a.m., several helpful Uber drivers, and a generous buyer of our bus for parts at the last minute, we made it to Grand Junction by the skin of our teeth, and put on the best show of the tour.

What is your scariest road story? Again referring to this last tour, we had a show in Indianapolis, Indiana the day of the Indy 500. What we didn’t realize was how big the Indy was to that city. While we performed that night, little did we know that a riot broke out in a club right next door that escalated out into the street surrounding our bus with police officers in riot gear, and really angry, drunk Indy fans. We decided to skip selling merchandise and loaded up as fast as we could to get out of the city.

What are your thoughts on the current music business in general? Where do we begin? There are a lot of benefits and a lot of challenges. The digital age has proved to be both a blessing and a curse. Without it, our videos wouldn’t collectively hit over 10 million views as an unsigned band. We wouldn’t have been able to reach the world without that. The curse is that musicians and bands are so readily available for each and every listener that the mystique that used to surround the artist is gone. I don’t need to leave my house to see a band anymore because within seconds, I can watch a concert without leaving my couch, which is a problem because the only money that a band like us really makes, is from live performances.

Where do you see your music career in 10 years? Hopefully still making impactful music and getting to do what we love. We are really excited to add our manager, Paul Crosby (founder of Saliva), to the Silent Theory family. We can’t get into details as of yet, but great things are in the works.

In one word? why are you in a music career? Passion