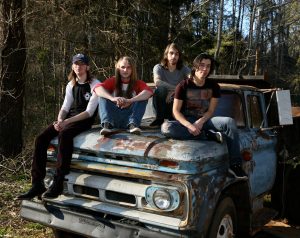 Ain’t gonna lie, I am so excited to write about these dudes. It isn’t often Josette and I are able to attend music live, but we were lucky we were able to catch this one. The show was in a small town at a small venue near home. I knew of the headliner and the crew that accompanied them, big fans of what they do and are all about. I did not know there were going to be multiple opening acts, much less who they were. A few hours after the doors open, these long haired unassuming young men march out to the stage. They look the part, seem a little shy at 1st glance. I am thinking negatively “oh gawd here we go”. The lead singer starts to speak, and you can see there is something there for sure. Then, the 1st song starts and I’m like “what the actual fuck is going on?”! Lead guitar, bass guitar, drums, and a lead singer. Forgive me, but I was not able to find any of their names or relationship to each other on their website or Facebook page. It doesn’t fuckin’ matter, these four are bad ass. The drummer was perfect and precise, keeping everyone in line. Bass player was on top, full of energy, and spot on. Lead guitar, best in class, his fingers had to be bleeding post show. I would dare to say that not only the lead singers vocals are something unheard of these days, but he may be the best upcoming front man on the planet. As an opening act, several times he said “you all aren’t here for us, aren’t you ready for ” the headliner name”?!!!” I am thinking to myself, hell no, you guys fucking rock your asses off. They performed almost all originals, but also played a cover song. At 1st,  I felt a little disappointed that they felt like they needed to do that, because their originals commanded the show (commanded the night for me). With that said, the cover song was killer, and I see why they performed it 100%. The cover song highlighted each band member individually. Not to shit on anyone, because I understand that it is hard to perform live for certain genres. The remainder of the show with the other acts were recorded tracks with the singers singing over their own tracks. After the show was over, I am thinking to myself…I want to see the band that performed 100% live and nailed it to the extreme. That band was Seven Year Witch, and that band OFFICIALLY ROCKS. 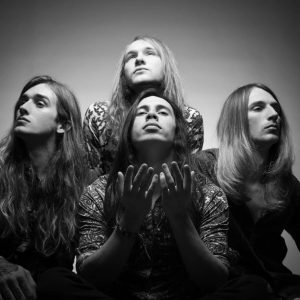 FROM THE BACKWOODS TO THE BIG STAGE.The backwoods of South Carolina isn’t one’s first thought when it comes to a modern shock to the heart of rock n’ roll. Straight out of left field with an electrifying hybrid of hard rock, blues-punk, and 70’s garage rock, Seven Year Witch emerges with enough stage energy to feed a generation starved of real rock n’ roll.

The Interview with Aaron Langford of Seven Year Witch

What make you Officially Rock? We’ve worked extremely hard to hold every aspect of the band to the highest standards, but I believe our edge is our on-stage energy. When that first note rings out, we go 100,000% til the very end. Whether it’s jumping off amps, breaking our necks head banging, or onstage acrobatics, we’re doing the damn thing.

What drives you as a musician? We as a band are driven by an equal combination of musical passion, our fans, and being broke as hell. Nothing makes you work harder than being hungry!

Who are your main influences? Our biggest influences would have to be Led Zeppelin, Soundgarden, Jack White, Queens Of The Stone Age, Muse, and The Wiggles

What is your songwriting process?When it comes to songwriting, usually one of us will have a riff or a rough skeleton of a song that’s been on our minds for a while. We’ll bring it to practice, jam on it for a while and see if anyone has anything to add or change. We may stew on it for months before we decide it’s a finished product. The cool thing about our music is that it’s never really just one persons song. While someone may have the initial idea, everyone pretty much writes their own parts to it. That’s what makes it a Seven Year Witch song.

What is your craziest road story? Once, while on a DIY tour, we parked overnight in a Walmart parking lot in Georgia to get some sleep. We woke up in the middle of the night to this odd noise coming from the trailer. Looking out the back window, we could see some crackhead trying to open the door to steal our gear. I grabbed some bear mace from my bag and Beau had an unopened beer bottle. On the count of three we all jumped out of the van and charged the guy. Beau threw the beer bottle and managed to hit the guy in the face while I accidentally sprayed Seth with the pepper spray. The dude took off immediately but dropped his cell phone. The rest of the night was spent prank calling all this dudes contacts and posting on his FB.

What is your scariest road story? The scariest story was probably when our van broke down about an hour and a half from our show. The venue sent a guy to pick us and our gear up. When he got to us, we noticed this guy had a serious limp and some teeth, he was a nice dude though, serious old pirate vibes. Well we load up our gear in his little pickup and cram in. This dude starts going down the interstate and is absolutely flying. I’m talking over 100mph at times. To top it off he is swerving like a drunk, barely missing cars and guard rails by what seemed like inches. It’s about this time he mentions that he has terrible nerve damage in his arms and hands and that his truck has a broken tie rod. We’re outwardly cringing any time we pass a car and after about 30 minutes we tell him we need to pull over to pee. He pulls into a gas station and we all scramble to the bathroom to come up with a plan of escape. Eventually we come out and I tell this dude that his driving is like something out of a nightmare and that he can take our gear to the show but we’re gonna call an Uber. He got a little upset but he still ended up taking the gear. Luckily there was one Uber in our area who agreed to take us the last hour to the show. Somehow when we got there, the old pirate had managed to transport all of our gear in one piece and we ended up having a blast.

What are your thoughts about the current music business in general? We’re still fairly green in the business aspect of music, so it’s hard to get the full scope of things. But what I can say is that it is steeped in ambiguity. It’s true when they say it’s all about who you know, especially in the music industry. Sadly for all the rockers out there, in recent years Rock music hasn’t been at the forefront of mainstream music, so most labels and investors aren’t jumping to sign a rock band. But I think things are starting to come around. You can see it with bands like Dirty Honey and Greta Van Fleet. Whether you’re fans of theirs or not, they have managed to pull some of the spotlight back onto RockN’Roll and that is a positive thing. It’s up to bands like us and all the others out there to bring Rock back from the depths and make it a hot commodity again.

Where do you see your music career in 10 years?Hopefully in 10 years the other boys and I are steadily touring the globe as a major headliner and hitting festival circuits when we can. Also, it’d be nice to be able to afford something other than Ramen noodles every night, so that’s the goal!

In one word, why are you in a music career? PASSION

Misfitt Toys EXCLUSIVE PREMIER VIDEO: GETS ME OFF by Hannah Cutt