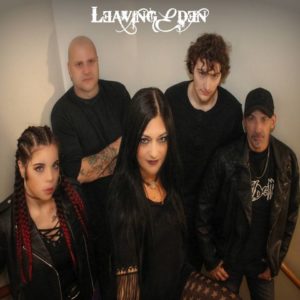 Leaving Eden will leave you in a state of ROCK. This female led (my favorite) rock and roll band Officially Rocks! There is a reason this band is sought after to perform coast to coast in the United States, Canada, and the UK …. because they are original, they sound good, they just plain out put on a damn good show. If you want to get the blood flowing in your venue…hire Leaving Eden.

What makes your band Officially Rock?

Nice to chat with you here I am Eric Gynan cofounder of the rock band Leaving Eden out of the Boston mass area USA. I guess putting on a kick ass show, playing thousands of shows touring the USA Canada and the UK. We’ve been to 47 out of the 50 states. We’ve had the opportunity to play with some of the biggest bands out there like Disturbed, Shinedown, Black Sabbath (Heaven and Hell), Avenge Sevenfold, Alice In Chains, Alice Cooper, Marilyn Manson, Five Finger Death Punch and the list goes on.

What drives you as a band?

When you’re die hard musicians like ourselves we just love to play music no matter what, our motto has always been we will play anywhere anyhow anyway so long as we can. As a musician you either love touring or you Hate it. We just happen to love it. We love to go places that we’ve never been we love to meet people that we could have never possibly have met so really the music drives us and of course our friends that we meet along the way.

What/Who are your main influences?

What is your songwriting process?

I am the primary songwriter of Leaving Eden. I’ve learned through the years how to connect with the universe because there’s a lot of information out there. If you get yourself in a kind of meditative state you can hear the music and the lyrics the melodies, it’s all playing in your minds eye and it’s my job to get it down to some kind of recordable mode. Sometimes it will come while I’m sleeping the entire song completely produced I just got to wake up and go to record the idea. It’s pretty simple actually.

What is your craziest road story?

Well we were on the road and we were heading to play this benefit concert. When we got there I looked around and there were these massive stages and lights sound systems and I was excited and said wow this is going to be pretty cool. The Promoter looks at me and says yeah you guys are playing over there and points to this little coat rack of a stage made out of wood maybe a foot off the ground. So like I said we will play anywhere anyhow anyway so long as we can and we played. When we got off stage the promoter came up to me and said wow you guys are great do you want to play tomorrow ? I said yeah man what are you got going on. He seemed to get upset and said, what do you mean what do I got going on, you don’t know what’s going on here, do you know how much money I spent on the advertising for this, what do you think this is all here for you? Woodstock man! So I said Woodstock like the original Woodstock or of the 90s Woodstock and he said Woodstock man, Jefferson Starship, Country Joe, 10 years after, Big brother and the holding company, do you want to play or not? I said absolutely man sorry were not from around here so didn’t see any of the advertisements. We got to play those stages and we got to hang out with the bands dining with the Kings.  For us, it was pretty much full circle because that’s where it all started at Woodstock.

What is your scariest road story?

I guess it’s when we got robbed. We were in a hotel somewhere I don’t remember where and we had a couple rooms. Some of the guys stayed in one room and someone broke into the room while they were sleeping and stole a computer, pants, wallets, phones and fortunately nobody woke up. My feeling was it could’ve been much worse had anybody woken up.  I don’t think that you break into a room while people are sleeping, we’re talking about tattooed guys you know big guy’s, road crew, my feeling was it could’ve been much worse.  You don’t break into a room like that unless you have some kind of a weapon then if we heard the commotion in the room next-door we could’ve came out and ran right into it so we were pretty fortunate actually that nobody woke up.

What are your thoughts about the current music business in general?

Well I kind of think that it’s all the same only the names will change. There are still many huge musicians out there making some serious money. Yes CD sales are becoming obsolete because of the streaming services but if you get millions of streams well then you’re going to make some money so that’s why I say it’s changed but yet still the same. Touring is definitely a major player in the life of a musician and with the internet an unknown band can get out there and get heard. I think that there are a lot more opportunities as well. So I look at the music business as an optimist and with an open mind.

Where do you see your music career in 10 years?

I think that any musician that is really trying to succeed must feel that they can be at the top of their game one day. Of course that’s the hopes and dreams of any musician an for us,  movies have been helpful. I Also wrote and I’m directing a Fake reality comedy called the Nitwit, which Leaving Eden’s music will be in, tirelessly touring and putting out albums I think this can all help to get us to where we want to be. I have learned to enjoy the moment for what it is, work hard for the future but appreciate where you are now in your career and be happy.

In one word, why are you in a music career?